In geological terms the Afar or Danakil Depression, also known as the Afar Triple Junction, located in Ethiopia's Afar Region, is also part of the 'Great Rift Valley'. Situated above the Northern part of the Ethiopian Dome, where the Arabian and African Plate boundaries are pulling away from each other, the East Africa Rift Valley is showing signs of significant changes to come. 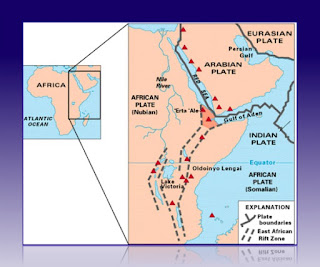 Red Sea Gulf of Aden Across both the Gulf of Aden mid-ocean ridge system and the southernmost part of the Red Sea the plates are moving not only apart but also sliding past each other with one side moving to the left with respect to the other.

Design Tectonics
This concept of 'design tectonics' came to me as I was considering how much change the world will face over the next one hundred to five hundred years .. maybe a thousand years of change - certainly a thousand years of change! Some of which will be similar to what we are seeing now in 2011 and some of the changes will be sudden and dramatic, like the changes happening in Japan.

On a world view this could be described as "Design Tectonics", where the planet periodically undergoes an impressive restructuring. One potential change running down this Eastern corner of Africa could be a deepening of the rift where water from the Gulf of Aden fills the basin and almost creates an Island.

It seems obvious as the East African Rift Valley and depression continues to spread and if there would be major slippage within the Gulf of Aden undersea transformation faults, then one could almost imagine an Island being formed out of Somalia. As the Nubian African Plate moves Northwest the Somalian African Plate is moving Southeast.

The crustal depression to the North, close to the Nabro eruption in Eritrea is geologically shaped like an estuary (where the crust is spreading and thinning) and this is what I mean by Design Tectonics. I don't know if that area could collapse over time, as I am not a Geologist.

Part of the tectonic remodelling of the East African Rift lies in the contrast of the massive height of Mount Kilimanjaro volcano to the South on the Tanzania/Kenya border and the Northernmost Danakil/Afar Depression where the low lying volcanic vents are below sea level. The Rift Valley Depression is the lowest point in Africa, with Lake Asal lying 155 meters below sea level.