Pieces of The Cosmic Puzzle

I caught the NASA news release below, which as it stands is a little misleading and confusing. On the NASA site they omit the "millions of years ago" roll theory reported at News In Science: Millions of years ago, Saturn's moon Enceladus may have somersaulted in space, creating an ice-spewing hot spot on the moon's south pole, scientists suggest. Science News 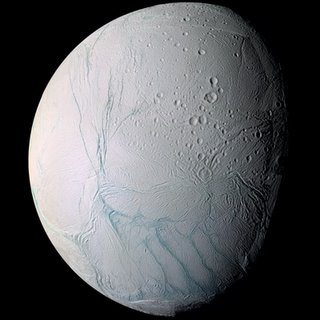 NASA-Funded Study Says Saturn's Moon Enceladus Rolled Over. Saturn's moon Enceladus - an active, icy world with an unusually warm south pole – may have performed an unusual trick for a planetary body. New research shows Enceladus rolled over, literally, explaining why the moon's hottest spot is at the south pole. Enceladus recently grabbed scientists' attention when the Cassini spacecraft observed icy jets and plumes indicating active geysers spewing from the tiny moon's south polar region. "The mystery we set out to explain was how the hot spot could end up at the pole if it didn't start there," said Francis Nimmo, assistant professor of Earth sciences, University of California, Santa Cruz (May 31, 2006).

Cassini-Huygens In January 2005 plumes of icy material extend above the southern polar region of Saturn's moon Enceladus, imaged by the Cassini spacecraft. The monochrome view in the picture is presented along with a colour-coded image on the right. 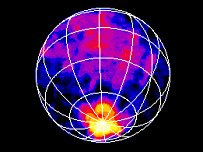 Enceladus
is a small moon, which scientists on earth assumed to be dead, a floating ball of ice. The Cassini-Huygens satelite showed a different world than the one imagined. The satellite found a hot spot at the south pole, spewing massive heat, water and ice. The moon has an atmosphere. A cometary like jet tail emanates from The south pole. Heat is coming out of the interior.

Enceladus (Mythology) According to Greek mythology, Enceladus was one of the Gigantes, the enormous children of Gaia (Earth). During the battle between the Gigantes and the Olympian gods, Enceladus was disabled by a spear thrown by the goddess Athena. He was buried on the island of Sicily, under Mount Etna. The volcanic fires of Etna were believed to be the breath of Enceladus, and its tremors to be caused by him rolling his injured side beneath the mountain.

From Zecharia Sitchin's Website: The exciting news came from a report in the journal Science (10 March 2006), in which NASA revealed that its Cassini spacecraft discovered that Saturn’s fourth moon, Enceladus, spouts water geysers — “which hints at pockets of liquid water under the surface.” For that the temperature below the surface must be above freezing. In fact, even the moon’s above-surface temperature turned out to be 100 degrees warmer than what had been expected!

While planets generate internal heat from radioactive materials in their cores, the Saturn moon, it is now theorized, may be warmed by magnetic reactions as it orbits Saturn. One way or another, the astounding discovery corroborates scientifically the information that I have reported based on Sumerian writings: Yes, even that far away from the Sun, it can be hot enough for water to flow and life to emerge! March 2006 Z. Sitchin

The unexpected hot spot around Enceladus’ south pole is another indication of electric currents coursing through Saturn’s moon and connected with the electric circuits that compose Saturn’s plasma sheath.

Saturn's Comet The new-found jets on Saturn’s moon Enceladus are indistinguishable from the jets on comets. Like cometary jets, they are electrical in origin and indicative of electrical activity throughout the Saturnian system. 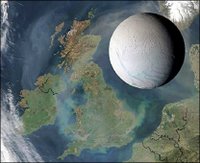 Thunderbolt's of The Gods
Posted by ZenSu at June 03, 2006 No comments: