The 6.3 New Zealand South Island earthquake that brought down buildings, causing the devastation of Christchurch on Tuesday, came one day after the sudden powerful explosion of ash from Mount Bulusan in the Philippines. Mount Bulusan's sudden eruption on Monday, sent volcanic ash towering three kilometers into the atmosphere. A major ash fall sent people fleeing from the affected areas.

For the farmers around the volcano the renewed eruption of ash means the loss of newly planted crops. Rice fields and Banana plants were destroyed, as food crops were covered in heavy layers of ash. With a downpour of rains the ash will form watery lahar flows, altering the river and irrigation systems - covering the land with a grey volcanic sludge. It is a difficult time, as this is what volcanoes do, they cover the land below their summit with life giving ash and provide the land's future fertile soils.

The Bulusan volcano erupted suddenly on February 21 and the New Zealand Earthquake followed on February 22, 2011. New Zealand sits on the intersection of the Pacific/Australian tectonic plates, on an area known as 'The Ring of Fire'. The two Islands that make up New Zealand are sandwiched between those two plates with a trail of volcanoes extending into the ocean to the North. Bulusan in the Phillippines is also located on the Pacific Ring of Fire, which follows the continental edge of the Pacific Ocean from Chile to New Zealand. 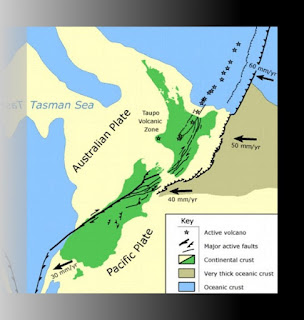 As a result of the New Zealand earthquake the Tasman Glacier was pushed sixty meters above the level of the Tasman Lake, through which a 30 million ton iceberg broke away from the main Glacier. It's called 'Glacial Calving'.

Of course, many of us are wondering if all these events could be related. The distance involved between New Zealand and the Philippines would appear to be too great for there to be any event-relationship.

We can look at these events with the eyes of on-the-ground 'Earth Dwellers' and say the distances are too great for there to be any relationship between the two. Alternatively we can look at these events from above (so-to-speak) and apply a long lost science of our 'ancestors' .. the people who mapped Antarctica and who laid out many of the Ley Line Stone Megaliths and Dragon Line pathways.

There are two forces at work here. Something triggered the Philippines reaction and something triggered the Christchurch earthquake. In this case you have two points on Earth reacting to something. Let's call it the 'third-force'. Is our world merely mechanical or is it the third-force that is activating events on Earth? I feel that this other force is so pervasive that it instantly affects the Sun and the Planets in an undivided event beyond physical time and beyond physical space.

The ancient Star-Mappers and Megalithic Builders knew this. They not only mapped star alignments across the landmasses of the planet; but they understood and mapped the fiery Dragon-Lines that carry energy (magnetism) around and through the surface of the planet. I imagine most of them are in the sea.

New Zealand and the Philippines sit on top of the most powerful Dragon-Lines we know. What makes these Islands so beautiful is what also makes them so dangerous. In times of stability they are astonishing places to live; but in times of upheaval people have to know what is happening around them and adapt to those changes. This is the second destructive earthquake to hit Christchurch within six months, following the destructive 7.1 September 4 quake in 2010.

In 3D reality there are three main principles interacting and creating life. There is 'matter', there is 'energy' (magnetic force) and there is spirit [the third-principle]. This has nothing to do with religion or belief systems - this is a cosmic science from which all the worlds are created and have order. Spirit, magnetic force and 3D matter are - in reality - one force. But in physical form we experience the illusion of many forms and many forces at work.

In 2011, we are on the outer edge of 100 years of transformation; out of which a new form of human consciousness will emerge. The spirit consciousness enters physical 3D at birth and the bio-technology we interact with is the human body, mind and brain. From 2011 to 2111, we are going to discover that the body is the brain and the brain is the planet. The mind is the universe and the heart is the 'place of spirit' inhabiting the physical dimensions.

Email ThisBlogThis!Share to TwitterShare to FacebookShare to Pinterest
Labels: 2011*Transformation

Small Is Great & Great Is Small

A recent article in The Register reads: LastFM Oopsed over by Apple .. and they go on to discuss the 30 percent subscription tax Apple are levying on content producers. However, this is not new news... Apple also levy a 30 percent sort of 'tax' on publishers selling their books though their electronic market place. Their 30 percent is more than the producer/creators share of the content that the creators created and the producers produced...

Why would any of this come as a shock? Why would people be so surprised? We live in a mega-gross, mega-rich, mega-size, mega-hungry too-big-to-survive corporate system. Even India and China [who should know better due to thousands of years of Sun Tzu and high culture], even they are drowning in the illusion of bigger profits from bigger corporations. I call it 'greed', Taoists would call it 'out-of-balance'.

To understand what I am talking about, look at nature. Go look at an oak tree or a beech tree - find a big tree .. how about a Sequoia? All of nature and all trees, mountains, lakes, oceans, flowers and volcanoes grow in proportion.

That is simple to observe... If a giant volcano became even more giant it would destroy the world and if a colony of dandelions grew as high as mountains or if a sun flare grew as big as the Solar System... that is a basic way to understand 'proportions'.

For example, mankind in most activities grows and lives outside his and the Earth's proportions. Humans are greedy and so we fish the oceans dry, we cannot have enough of what we have, we always have to have more... and this is one example of out-of-proportion growth.

In today's corporate climate bigger is plus and smaller is minus. You don't want to go to smaller, you want to go to bigger. The problem is bigger than bigger is 'out-of-proportion' to nature's laws.

The cancer tumor is equal to its growth [a subtle piece of Zen that takes some thinking about]. Imagine a Dinosaur - the biggest that there is - and double its size every four months. There you have your 'corporations' and their appetite for greed.

The reality is, a big crash is coming equal to the size of the monster created. Human behaviour seems to be immune to the laws of nature; but we are not immune. The same laws apply and living according to those laws creates wealth (balanced wealth), good fortune and well-being. Disobey those laws and the monster you create will, at some point, collapse on you.

Small Is Great & Great Is Small
When I was a child I had an experience where my mind entered the universe on its own (as mind's are probably supposed to do). In the universe big was small and small was big. This is classic Zen .. the most distant largest planets were magnified but small, and the smallest particles were far away and bigger than the planets.

If human beings could understand or experience this truth then they would not break the laws of nature; but they would co-operate with these laws and would prosper, in a state of well-being and good health. That which is small is great and that which is great is small.

Our collective insanity to grow ever larger and to prosper ever more, to increase and never decrease and to expand and never contract is leading to 'disaster'.

I see a future where local 'technology' creations are as unique and as beautiful as hand forged Japanese knives or Japanese blades. I see a time coming where local technology groups create and produce regional Japanese blade technologies .. collectors items .. and not this mass produce crap people know today. Technology can be created and recycled locally, where the work benefits the local community.

The I-Ching
If I was a regional leader today or a corporate personality .. I would be reading and studying the I-Ching as a way to lead the raging waters of humanity back into balance. I would not be creating too-big-to-fail mega corporations. I would not be pushing against the laws of nature. I would be seeking to understand that the laws of nature have VALUE and that so-called 'restrictions' are really INTELLIGENT GROWTH.

I was a kid, still at school, when I began to study the I-Ching. I did not totally understand it - but I 'understood' it without knowing how. I would read the I-Ching because I could not figure it out. I now realise that studying the I-Ching is like drinking water.

That is called: The Balance of Nature ...

I Ching: Book of Changes, by Richard Wilhelm

Email ThisBlogThis!Share to TwitterShare to FacebookShare to Pinterest
Labels: I-Ching

Mount Shinmoedake is one dangerous volcano. A massive explosion from the crater today, February 1st - shattered windows up to 8 kilometers away, felling trees with the shock of the blast. Over a thousand local people have been advised to evacuate as the danger of landslides and lava flow have increased.

This eruption is beginning to look like a very dangerous eruption. What I find again strange is that the last really violent eruption from this volcano took place in February, 1717 with level 3 eruptions from the crater.

Eruptions from Southern japan's Shinmoedake peak are similar to eruptions that took place in 1716 - 300 years ago... See the historical report @ Daily Yomiyuri, Volcanic experts have sounded an ominous warning about the recent eruptions on Shinmoedake peak, saying they closely resemble highly destructive blasts that occurred there nearly 300 years ago.

On 28 January, 2011 volcanic experts in Japan had observed a lava dome of 50 meters in diameter as the volcano reaches the lava eruption stage. However, the experts say that the 'Edo Period' eruptions were 10 times bigger than the current eruptions. The 1717 eruptions are classed as a VEI 3 (severe), classification Vulcanian/Peléan, ejecta volume 10,000,000 m³, 3-15 km plume.

Residents in South Japan are evacuating the area as the eruptions become more violent. Ash from the eruption has reached over 17 cities in the surrounding area. On January 31 the volcano showed signs of being close to molten lava flows as the lava dome increased from 10 meters in diameter to 500 meters in diameter.