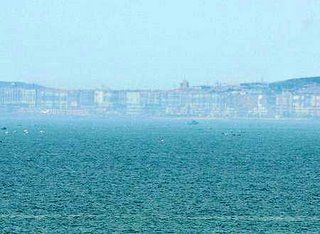 Photograph of rare mirage off the coast of east China's Shandong Province.

Thousands of local residents and tourists witnessed a mirage of high clarity lasting for four hours off the shore of Penglai City in east China's Shandong Province Sunday. Mists rising on the shore created an image of the city, with modern high-rise buildings, broad city streets and bustling cars as well as crowds of people all clearly visible.

Penglai had been soaked by two days of rain before the rare weather phenomenon occurred. The mirage took place during the week-long Labour Day holiday. Experts said that many mirages have been recorded in Penglai, on the tip of Shandong Peninsula, which made it to be known as a dwelling place of the gods.

They explained that a mirage is formed when moisture in the air becomes warmer than the seawater temperature, refracting rays of sunlight to create reflections of the landscape in the sky. -- Xinhua (May 2006) Thoth Web 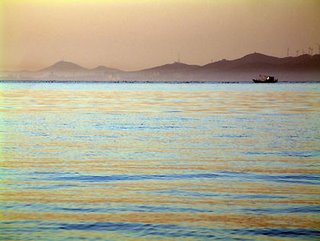 Other Dimensions
In the past few months mirages have appeared in many different areas of Mainland China. What are mirages all about? Most people believe that mirages are caused by reflections from the atmosphere. This explanation, however, is far from being completely convincing. With the advancement of modern science, scientists have come to understand that the dimension human beings inhabit is not the only one in the universe. There exist other dimensions that man can't see, which have matter and life-forms in them. A mirage is a way in which other dimensions can manifest in our dimension. That is to say the existence of other dimensions can "accidentally" display themselves in this space in the form of mirages, allowing us to see them. Pure Insight