As I was researching for solutions to the increasing global crisis. I was thinking about the media and why they exist at all. Do they exist to inform or to condition? Unlike Blogs, the content is controlled by owners and editors. The Blog writers are mostly dedicated servants of their own design. The media is its own paid servant.

I have been warning people for years that water supplies will be at the center of global and local conflicts. Today you see water scarcity issues spreading across the media propaganda machine, and what is their concern? What are they telling people? That it is a problem caused by circumstance. Populations are rising and water reserves cannot replenish as the amount of water used by humans is more than the amount of water returning to the resevoirs, rives, lakes and aquifiers. The problem is external to ourselves. 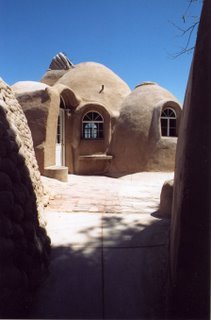 The increasing global water problem is not an external situation, it is an internal crisis. Only, we do not recognise it as such. Governments are legally responsible for the water supply, not you or I. This is totally wrong. You and I are responsible for the water supply, not Governments. Especially so when the supplies dry up, because we are the ones who will be effected. Around the world it will be a local tragedy making global headlines. The ones to blame for that tragedy are ourselves.

If chemicals or sewage pour into a river, you will be the one effected and Governments will be the ones who cover it up. Our internal lack of awareness and lack of caring for our world has allowed corporate government interests to take over ownership of the environment and use it as they wish. On a family by family level people use resources and do not care what environmental effects this will have on our world. Only when the poisons you pour into the water supply come back to haunt you, will you care about the environment. But by then it will be too late, you will be dead.

The global water crisis is an accumulated problem created by billions of people who do not care. The monolithic and centralised water systems have led to growing abuse. If people had to be directly accountable for the broken systems water loss, things would be much different today. Much of the water pumped to our homes is lost through cracks on the way. The earth pays a high price for our incompetance. Now our incompetance is squeaking at the seams.

This is not a failure of the planet, it is a failure of the people living on the planet - of mankind. We have largely destroyed our world, and as the last inches are sailed towards hitting the iceberg, the responsability lies with us. The media would have you believe these are external events outside your control. The whole point is that these are personal internal failings that are year by year leading to nature's graduation exam. Nature will give it all back to us, and ask us to deal with it. The point I am making is that the monolithic, centralised, state controlled circus is not the much needed resource that will pass nature's exam. When the sewage and poison comes choking back up into your home, you will have to deal with it. Or you can begin to do something before the drains back up.

Natural disasters are human created disasters blamed on nature
Posted by ZenSu at August 18, 2006 No comments: 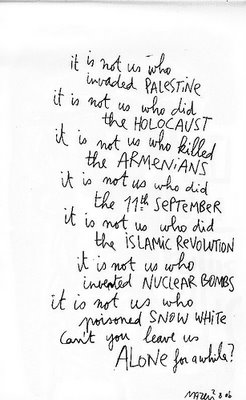 Mazen Kerbaj, Beirut
Posted by ZenSu at August 06, 2006 No comments:

The Waters of Life

People have no idea just how fast the 'water issue' is going to alter regional conflicts, regional borders and decide whether a country survives or not. It is easy to fight wars when there is still water to drink. In fact, you can pretty much say that all wars are fought on water, because human beings need water to drink and it is water that grows our food. You don't have wars without food. When there is no food, you have starving people.

The oceans, seas lakes and rivers provide 90 percent of the moisture in the atmosphere. Evaporation from the oceans is the primary mechanism of the surface to atmosphere water cycle that feeds our planet. The salt water to fresh water cycle takes a strange twist as this water of life is also the salt of our tears when the evil of war is observed through the water of the heart. All wars, throughout the history of man are about resources. Either the fighting is about a landgrab, or it is about oil, water and the control of those valuable resources. If they were not valuable no one would want them.

knows this, and everyone is keeping quiet about it, for the sake of 'diplomacy'. Even the Arabs are keeping their mouths shut about this unfortunate truth.

Keeping your mouth shut about the truth is part of the problem. How unfortunate for the world that you have this bunch of guys in South Lebonon not wanting to give up the valuable resource of the Litany river. While guys sitting in the middle of the dried up desert further south need that water. The future water shortages are not going to arise out of a slow and gradual process of decline. It can happen almost overnight when the winter rains do not come, or when temperatures suddenly rise thoughout the summer and do not alter. Aquifiers do not fill, and land cannot be irrigated. Suddenly no water means no food, or it means no existence. And that reality is coming, which is why you have the present wars.

We live on planet Earth, where 97.5 percent of the water is salt water. Less than 1 percent of fresh water is usable, and we share that water with animals, birds, plants, fish and trees. "The water cycle is all about storing water and moving water on, in, and above the Earth. Although the atmosphere may not be a great storehouse of water, it is the superhighway used to move water around the globe." Water facts

* Three-fourths of the Earth's fresh water is stored in glaciers and ice sheets.
* Over 90% of the world's supply of fresh water is located in Antarctica.
* It takes 6 gallons of water to grow a lettuce, 2,600 gallons produce one steak.
* The U.S. consumes water at twice the rate of other industrialized nations.
* Two-thirds of the world's population will experience water shortages by 2025.

The Global Fresh Water Crisis
Across the world temperatures are rising, droughts are increasing, the duration of droughts are increasing. By the end of July 2006 more than 60 percent of the United States was suffering drought conditions. It was the same in Europe as temperatures rose above 38C (100F) and stayed there. Currently in Israel where the average temperature for August is officially 26C (79F), by the 4th of August temperatures in Eilat had reached a sweltering 42C (107F), with 8 percent humidity. Temperatures at Ovda International Airport were sitting at 38C (100F), with 14 percent humidity. People today have no idea of the Middle Eastern conflicts that will flare up around the most precious reserve of all: WATER. Global Water Crisis

In the Middle East 5 percent of the world's population are facing extreme water crisis. The populations in these regions are expected to grow as the water reserves drop dramatically. At current population levels fresh water supplies are not being replenished, because the water usage is far greater than the renewable reserve. Add to that a population increase and the Middle East is heading for a major disaster. Africa is also facing a massive decrease in fresh water supplies. Europe and North America are experiencing warmer weather in the winter months, that also cut the supply of fresh water filling mountain rivers and streams.

More Than 60 Percent of U.S. in Drought
"A deadly combination of heat and drought is slowly wreaking a trail of devastation across much of the globe, and the full extend of this scourge will only be felt as winter nears. The current phenomenon took meteorologists by surprise as it was unusually global in its reach. Like Murphy's Law, everything that could go wrong did."
Peak Oil and Peak Water

As the demand for water increases in Israel, in the future where are they going to get this much needed water from? The river Jordan is running dry. Underground aquifiers are filling with salt water from the sea as the water tables drop on land. Turkey, Syria and Iraq share the river Tigris and the river Euphrates, and Turkey is planning to build a dam.

We still have the option to change the way we live, but if countries do not realise that populations have to be reduced, then the future for humans will be continued war, famine, drought, disease, leading to planetary collapse as the larger more powerful nations try to impose their land allocation roadmap on the indiginous populations living in those areas. Agriculture uses 70 percent of the fresh water supplies. That means our precious food supplies depend largely on a continued supply of fresh water.

"Two out of every three people in the world will be facing water shortages by 2025." - The Planetary Water Cycle
Posted by ZenSu at August 04, 2006 No comments: