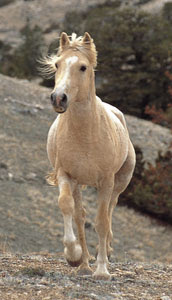 Cloud - The Wild Stallion
Wild Stallions roaming free on Public land across areas of the United States, are becoming more and more an endangered species at the hands of the Bureau of Land Management.

Herds of horses that once roamed across American in their millions, have been reduced to wild horses numbering in their thousands. A hundred years ago an estimated two million mustangs roamed the Western range. Today there are fewer than 50,000.

Clouds herd, numbering 190, are to be reduced to 70 by the Bureau of Land management - well below the numbers needed to sustain genetic diversity. If the herds are reduced to these numbers they will no longer be genetically sustainable and the possibility of them completely dying out is guaranteed. The Cloud Foundation

Although the Spanish brought horses to the "New World", it was only after the Pueblo Revolt of 1680 that large numbers of wild horses spread across the Great Plains. The Pueblo Revolt of 1680 was the single most successful act of resistance by Native Americans against a European invader. It established Indian independence in the pueblos for more than a decade. This provided the Pueblo Indians with several thousand horses. Almost immediately, they started breeding larger herds, with the intention of selling horses to the Apache and Comanche Indians. America's Heritage: Wild Horses

Wild Free-Roaming Horses And Burros Act of 1971: "Congress finds and declares that wild free-roaming horses and burros are living symbols of the historic and pioneer spirit of the West; that they contribute to the diversity of life forms within the Nation and enrich the lives of the American people; and that these horses and burros are fast disappearing from the American scene. It is the policy of Congress that wild free-roaming horses and burros shall be protected from capture, branding, harassment, or death; and to accomplish this they are to be considered in the area where presently found, as an integral part of the natural system of the public lands."

The Bureau of Land Management is rounding up and eliminating 12 herds (650 horses) off 1.6 million acres in Nevada - next they plan to destroy Cloud's herd with a massive removal of 70 horses that would include older horses and young foals. By zeroing out whole herds and reducing others to below genetic viability, the BLM is circumventing the will of Congress. Is BLM just trying to do as much irrevocable damage to America's wild horses as they can before Congress can act? - Angels for Cloud
Posted by ZenSu at August 31, 2009 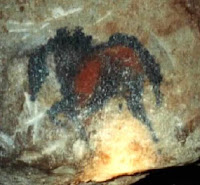 Wild horse advocates are seeking to halt federal land managers' plans to remove all mustangs from a large swath of eastern Nevada, saying the animals deserve protection under federal law.

The U.S. Bureau of Land Management has started removing 350 horses southwest of Ely and plans to begin removing 270 more in October near Caliente. The roundups affect all wild horses in an area around Ely covering 1.4 million acres or more than 2,000 square miles.

Horse defender Christine Jubic of Albany, N.Y., filed a petition last week for an emergency order to halt the roundup with the Interior Board of Land Appeals until it can rule on her appeal challenging the roundup. Wild Horse Removal

Big Cattle Vs Wild Mustangs
Most current Mustang herds live in arid areas which grazing cattle cannot fully utilize due to the lack of water sources. Horses are better adapted by evolution to such extreme climates. Wild Horse herds can range nine times as far from water sources as cattle, traveling as much as 50 miles a day. This allows them to utilize areas not grazed by cattle. In addition, horses are "hindgut fermenters," meaning that they digest nutrients by means of the cecum rather than by a multi-chambered stomach. In practical effect, horses can obtain adequate nutrition from poorer forage than can cattle, surviving in areas where cattle will starve. Wild Mustangs Wiki

Documents obtained from the Bureau of Land Management (BLM) via the Freedom of Information Act by a Phoenix-based non-profit, The Conquistador Program, reveal shocking and detailed plans to destroy healthy wild horses in government holding facilities as well as those still remaining in the wild on public lands. BLM's Secret Plan Uncovered

BLM employees as well as a USDA veterinarian held weekly “Implementation Team” meetings beginning in July of 2008 in which they discussed and developed strategies aimed at ridding BLM of thousands of mustangs. In October they completed a 68 page document entitled “Alternative Management Options”. Tactics included in this document are reminiscent of those used to wipe out Native American tribes in the 1800s.

The BLM team created scenarios for killing mustangs using barbiturates, gun shots, or captive bolts. Bodies would be disposed of through rendering, burial or incineration. They discussed killing 1200-2000 wild horses per year.

Minutes from these meetings as well as the Draft Plan reveal what amounts to "the final solution" for the American mustang. Even Cloud and his little herd in Montana are in serious danger if Bureau of Land Management implements these options.

The BLM plans a massive round up in Cloud’s herd beginning August 30, 2009. They will not guarantee that Cloud and his family will remain free.
Posted by ZenSu at August 31, 2009

Beijing is drawing up plans to prohibit (restrict) exports of rare earth metals that are produced only in China. Metals that play a vital role in cutting edge technologies from hybrid cars and catalytic converters, to superconductors and precision-guided weapons. Read: World faces hi-tech crunch as China eyes ban on rare metal exports - The Telegraph

On July 24 I posted: The Neodymium Wars - Neodymium is a rare metal whose production is essential to the future of all hi-tech nations. China produces 97 percent of the world's output of Neodymium...

On August 24 The Telegraph print an article warning that... "China is planning to hoard reserves." This is a very good article, you should read it as it may effect your future and your grandchildren's future .. Unless we take an alternative path into the future.

I am going to say something that most people will consider absurd - but I am going to say it anyway. You are conditioned to believe that in order to progress you have to dig and dig for rare earth minerals as oil becomes more difficult to extract from the Earth.

However, people on this planet do not need to dig for these minerals if they use their intelligence and their hearts. Love and respect for the Earth will lead people to find other solutions. The crazy thing I am about to say will one day become reality.

In green plant cells are all the elements to create a new Science, a new technology. Until now we have walked the path of metal and fire. Those days are over. Metal and fire will no longer rule the passage of man and cut up the Earth.

There are scientists and researchers in the future who will discover they can adapt plant cell life into functioning materials that allow human beings to live peacefully on this planet and create a life worth living.

Let the Chinese Government hoard their rare-metals, the toxicity will probably make them sick. There are alternatives to this insanity on every continent, existing for all people. The cells of plants will one day reveal, to the enlightened observer, a process that will illuminate our world to a new technological revolution. We are going plant-based as we leave fire and metal behind us.

Fire and metal have always signalled power of one over the other. This is what China's elite are threatening the world with, in the same pattern as the last 12,000 years. This is not the path the world is going to take. This is a re-run of the old Colonial show and it is boring ... unless the re-run is Star Trek '- )

We are heading for GREEN technology - literally. The geometry of plant cells will unravel compounds so revolutionary your grandchildren's children need never look back. The fire power of metal is coming to an end. Not through conflict - but through intelligence (enlightenment).

The world is so fearful -- Oh! Swine Flu! What will I do? Oh! Energy lost through reactions. Supply restrictions of rare earth elements! Oh! No! If you restrict the supply you increase the value. You force up the price and it is worthwhile to dig that stuff out and sell it.

Humans today are so stupid. Do you know what Magic really means? It means everything is a part of everything. You can find the same elements in bacteria, in plant cellulose, in probotics and replicate it. The efficiency of plant cells turning energy into power can be utilised by man.

The collective collaboration and cooperation of individuals understanding how common elements work and how they can be applied to sustainable communities is called development. The time of digging is over. It is time to plant!