I have not posted this to advertise magnetic water products...

...but because the information in this video sure is interesting.

Keywords: Magnetic waters memory effect - Is it real? - Can you drink it? Power from water vortex - Does it work?
Posted by ZenSu at November 21, 2008

by Oskar Thorvaldsson
In discussion with Dr. Clark about the Bee Problem she surprised me by telling me that she was once a beekeeper and that she knew exactly why the bees were dying off in record numbers.

In her opinion the bees are dying off because farmers are pressing the bees to become larger and thereby more productive. The bees are crossbred to jumbo size. Then they are supplied with ready-made plastic honeycombs covered with wax that most likely contains various chemicals.

Unfortunately all kinds of pollutants such as fungus have an easier time to settle into those king-size cells. As far as we can gather, most commercial beekeepers treat the bees with an onslaught of chemicals:

The chemicals reduce the immunity of the over worked and over-sized bees even further, Dr. Clark mentioned to me. A few months passed. When I looked into this problem again I found this headline online:

Should they dig deeper they would come up with headlines that read something like this: "Chemicals Used By Beekeepers Responsible for Colony Collapse Worldwide."

Here is the quote from the obscure article that I found online:
"I'm on an organic beekeeping list of about 1,000 people, mostly Americans, and no one in the organic beekeeping world, including commercial beekeepers, is reporting colony collapse on this list." said Sharon Labchuck.

Thank you organic beekeepers for saving the world! I sure will only buy organic honey from now on! But wait there is more we can all do! Please contact your local editor of a newspaper and put them on the right track on reporting on this important problem.
Finally you can help the bees (and everyone) by reducing pollution.

Email ThisBlogThis!Share to TwitterShare to FacebookShare to Pinterest
Labels: HoneyBee 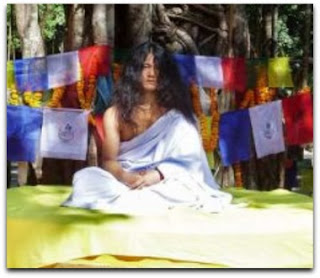 KATMANDU, Nepal 11 November 2008 — A teenage boy who many believe is the reincarnation of Buddha has re-emerged from the jungle in southern Nepal, attracting thousands of devotees, officials said Tuesday.

After retreating into the jungle for more than a year, Ram Bahadur Bamjan, 18, re-emerged Monday near Nijgadh town, about 100 miles (160 kilometers) south of the capital, Katmandu.

Upon hearing the news, thousands of Bamjan's followers, some from as far away as India, traveled to the site Tuesday to see him, police official Abhaya Joshi said by telephone.

There has been no formal declaration by Buddhist authorities that Bamjan is the reincarnation of the Buddha. But people have worshipped the teenager since he was first seen in 2005 meditating in the jungle, where he sat for months, motionless with his eyes closed among the roots of a tree.

Joshi said Bamjan plans to talk to his followers for a few hours every day for a week before returning to the jungle to meditate. The long-haired Bamjan, dressed in a white cloth, appeared to be in good health as he spoke to his followers about peace and ending discrimination, according to the Rajdhani newspaper.

"It was an amazing experience to hear and see him. I have no doubt now he is the reincarnation of Buddha," said Sangeeta Lama, a woman who met Bamjan for the first time. Siddhartha Gautama, was born in southwestern Nepal around 500 B.C. and later became revered as the Buddha, which means Enlightened One.

Buddhists strongly believe in reincarnation, the doctrine that every soul reappears after death in another bodily form. "Meditating without food does not prove that he is reincarnation of Buddha. There is much study needed to be done," Shakya said.

"This is just the right full moon for him to reappear, it is his counter birth full moon." - St.Clair
Keywords: Buddha Boy Re-emerges
Posted by ZenSu at November 11, 2008

Though areas of India planted with GM seeds have doubled in two years - up to 17 million acres - many famers have found there is a terrible price to be paid. Far from being 'magic seeds', GM pest-proof 'breeds' of cotton have been devastated by bollworms, a voracious parasite. Nor were the farmers told that these seeds require double the amount of water. This has proved a matter of life and death.

With rains failing for the past two years, many GM crops have simply withered and died, leaving the farmers with crippling debts and no means of paying them off. Having taken loans from traditional money lenders at extortionate rates, hundreds of thousands of small farmers have faced losing their land as the expensive seeds fail, while those who could struggle on faced a fresh crisis.

When crops failed in the past, farmers could still save seeds and replant them the following year. But with GM seeds they cannot do this. That's because GM seeds contain so- called 'terminator technology', meaning that they have been genetically modified so that the resulting crops do not produce viable seeds of their own.

As a result, farmers have to buy new seeds each year at the same punitive prices. For some, that means the difference between life and death. Take the case of Suresh Bhalasa, another farmer who was cremated this week, leaving a wife and two children.

As night fell after the ceremony, and neighbours squatted outside while sacred cows were brought in from the fields, his family had no doubt that their troubles stemmed from the moment they were encouraged to buy BT Cotton, a geneticallymodified plant created by Monsanto.

'We are ruined now,' said the dead man's 38-year-old wife. 'We bought 100 grams of BT Cotton. Our crop failed twice. My husband had become depressed. He went out to his field, lay down in the cotton and swallowed insecticide.'

Villagers bundled him into a rickshaw and headed to hospital along rutted farm roads. 'He cried out that he had taken the insecticide and he was sorry,' she said, as her family and neighbours crowded into her home to pay their respects. 'He was dead by the time they got to hospital.'

Asked if the dead man was a 'drunkard' or suffered from other 'social problems', as alleged by pro-GM officials, the quiet, dignified gathering erupted in anger. 'No! No!' one of the dead man's brothers exclaimed. 'Suresh was a good man. He sent his children to school and paid his taxes.

'He was strangled by these magic seeds. They sell us the seeds, saying they will not need expensive pesticides but they do. We have to buy the same seeds from the same company every year. It is killing us. Please tell the world what is happening here.' -- Organic Consumers
Posted by ZenSu at November 05, 2008