Oh my goodness! Snow causes travel delays in Las Vegas! The pretty map on the right was created by Weather Underground. As you see the cold weather is bleeding down from the North... displacing the warmer and more stable wind and temperature cycles.

During times of stability the magnetic currents maintain elemental cycles from which all of nature grows.

Animals, plants, insects, bees, trees, birds, sea creatures and humans depend on these cycles for water and nourishment, for food production, safe living zones and breeding cycles for all living things. 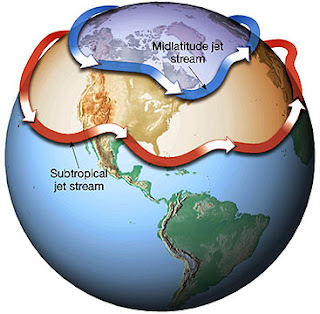 Cycles bringing change and transformation onto the Earth are not new. These are very ancient cycles. The current cycle is not so severe that it would turn the Carribean into Antarctica... However, changes to Earth's weather cycles are severe enough to cause food production problems, water resource problems, severe flooding, droughts, sea-level rise, increased volcanic activity, increased earthquakes, temperature rises, ice storms and sudden powerful blanket snow storms.

The question is, how do we deal with this unfolding reality? Fear, panic and selfish behaviour will not create a balanced approach at a time where people have to cooperate and work together to meet the challenges ahead. The changing cycles challenge is - cooperate and survive or divide and fracture. These cycles herald a time in which mankind can heal their inner psychic and psychological behaviour.
Posted by ZenSu at December 19, 2008

Planetary Economics - The Art of Compassion

The economic turmoil facing society in 2008, 2009 until 2014 - is a small part of a greater planetary evolution whose beginning will alter our lives over the next 100 years.

The real problem is that people around the world are looking at life (issues, and problems) in a very limited way, through media prescribed (vision limiting) bi-focal lenses. The economic bifocals are necessary when individuals begin to exhibit symptoms of blurring and panic when faced with economic meltdown of a crumbling archaic system.

Media bifocals correct this panic by limiting the depth of perception of the crumbling columns and falling roof. Therefore a large block of collapsing masonry seems like a harmless fly until it hits the observer, at which point perception becomes irrelevant.

The physical brain is designed to correlate and act on information close to the observer and simultaneously be aware of what is happening at a distance. In humans this ability operates mostly on automatic pilot. Humans are not aware that the mind is processing information beyond the point of their myopic focus at any given moment.

Animals and birds are fine examples of the art of immediate observation both near and far. A blackbird or sparrow searches for its food locally, and yet remain aware of predators at a distance. A hare or a field mouse may forage for food at the edge of a wood, and yet the hare or the mouse are aware of movements that indicate the approach of a hawk, a fox or a cat.

Humans have the same ability to see far and near in the same moment, but these far/near observation skills are eclipsed by desire to focus exclusively on the ego, appearance, what we WANT and the game/power struggle of what we GET for ourselves. Humans have become very self-centred. This activity on a global scale has led to the current economic crisis.

One aspect of the crisis is a total lack of awareness of where our food comes from, or what food really is. The ego is rarely aware of the world around it, of cosmos, the stars and planets, and of the earth itself. Growing populations consume at growing rates, with little thought to the planetary implications of this behaviour.

As the disaster approached (from afar), social myopia did not see it coming because no one was paying attention. The most ancient rules of behaviour begin with: If you do not care for the planet, you do not care for yourself. That is a very simple rule to follow, ensuring wealth for our grandchildren.

In the myopic world, what is wealth?

Wealth has come to mean indulgence, get what you can fast, take care of yourself, walk all over other people (if you have to), and always have more than your competitors. The structures this type of behaviour creates are crumbling and falling apart. As the masonry falls onto the wealth seekers in the temple, crushing them with a force equal to the selfishness they carry... no one looks up to see who created this mess.

All of mankind shares this planet with the trees, fish, animals, birds and insects. Currently, we take without giving. When individuals look outside of the ego-field they see their own reflection looking back at them as they destroy the earth. If one looks a bit further, the individual sees that as they destroy the earth they are destroying their own future, the future of their children, and are certainly destroying the future of their grandchildren.

Economics is a rational term for human behaviour. Buying silk or spices is the economic behaviour of consuming the earth's resources. Buying oil is a human (economic) behaviour based on certain needs. Alternatively, if the sands of the Sahara contained some power to fuel the worlds demand for energy, then emptying the desert of its sands would be an economic activity as a result of human behaviour.

The corrective healing for ego-driven-myopia, is to be aware of and see the world around us. Go for a walk in the park (if one still exists), walk across the fields or through the woods, and pay attention to the planetary provider of resources. Observe the animals and birds seeking to exist amid the concrete of towns and cities. Be aware of the weeds and plants growing at the side of the road. Paying attention to the physical surroundings far and near (there are stars and planets above our heads), beings us back in touch with the reality that surrounds us - and on which we depend.

To the soul, a fleeting moment of compassion, is the gold of the spirit. The Alchemical gold created by the ancients: The Art of Compassion. The ending of Ego. Being grateful to the planet for sustaining us, is the art of seeing far while observing what is near.

Email ThisBlogThis!Share to TwitterShare to FacebookShare to Pinterest
Labels: Survival

The world is currently watching Canada struggle for its life, as Conservatives seek to power their way through a series of breakdowns, leading to the inevitable separation of the country into three independent zones or Federations.

The French speaking persona of Canada can no more live in harmony with the English speaking persona than can Paris and London. These personae have different developments, different ways of viewing the world and are currently incompatible with one another. It will take two generations before they begin to trust each other. The third persona, the Native American, is incompatible with both the English and the French personae... and this will eventually lead to a third power zone.

At the start all three zones will be loosely described as the Canadian Federation. In the beginning of the breakup, the vying powers will pretend there exists some level of cooperation, in order to maintain a more cohesive presence to the world at large. However, the reality (at home) will be the antithesis of the face they present to the onlooking world.

As with archaic authoritarian regimes, the confrontation could become ugly. There is also the future possibility that leaders emerge who understand that cooperation and mutual respect is a more elegant way to deal with the inevitable.

Looking into the eyes of tomorrow, understanding that we are the future now... The change is forming in the consciousness of these very different cultural personae. At first it takes form in the psychic field, and gradually it begins to take form in the physical world. As long as people respect each other, this expression of a different view is as valid as any other, and it has a right to grow in the earth and be what it is.

Between 2009 and 2016 many unusual events will lead to the breakup of the present Canadian system, establishing balance by 2020. Severe storms and unusual swings in weather patterns foster local cooperation and search for solutions (survival). As events demand an immediate response, intelligent people will not wait for the lumbering moves (considerations) of a central governing hierarchy - who have little or no understanding of local needs. (Apply the same rule across the planet).

By 2020 earth changes and changes in the way the human mind perceives reality, will lead to the creation of a distinct French speaking zone, an English speaking zone and a Native American zone. Are you surprised that the Native people will reclaim some of the land their grandfathers emerged from?

Out of respect, and out of thanks for future guidance and help, all parties will agree on an independent sovereign zone for the Native peoples of North America. Their spiritual wisdom and connection to the land will be essential to the survival of all who live through these times of trial. Our minds, our psyche are an integral part of the land. Our minds, in balance, are a part of nature - a part of the weather and the earth.

In sad contrast to North America, The Highlands of Scotland (whose wise people were wiped off the face of the earth) will face extreme out-of-balance weather cycles. It will be 100 to 200 years before the ancient connections are reactivated there.

All people living on the earth now are not isolated from the wisdom of the past, the future and the wisdom of the earth. We are one cycle in many cycles, but we have to live in honour and respect each other. Differences of perception do not make us enemies, they make us a diverse and beautiful ecological element of the blue planet, and of cosmos.