NGC 4696 in the Centaurus Galaxy Cluster: 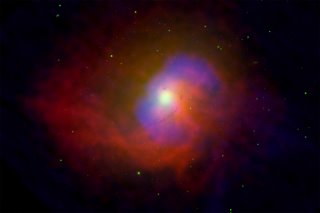 Black Holes Found To Be Green By NASA's Chandra Black holes are the most fuel efficient engines in the Universe, according to a new study using NASA's Chandra X-ray Observatory. By making the first direct estimate of how efficient or "green" black holes are, this work gives insight into how black holes generate energy and affect their environment.

The new Chandra finding shows that most of the energy released by matter falling toward a supermassive black hole is in the form of high-energy jets traveling at near the speed of light away from the black hole. This is an important step in understanding how such jets can be launched from magnetized disks of gas near the event horizon of a black hole.

"Just as with cars, it's critical to know the fuel efficiency of black holes," said lead author Steve Allen of the Kavli Institute for Particle Astrophysics and Cosmology at Stanford University, and the Stanford Linear Accelerator Center. "Without this information, we cannot figure out what is going on under the hood, so to speak, or what the engine can do."

The efficiency of the black hole energy-production was calculated in two steps: first Chandra images of the inner regions of the galaxies were used to estimate how much fuel is available for the black hole; then Chandra images were used to estimate the power required to produce the cavities."If a car was as fuel-efficient as these black holes, it could theoretically travel over a billion miles on a gallon of gas," said coauthor Christopher Reynolds of the University of Maryland, College Park.New details are given about how black hole engines achieve this extreme efficiency.

Some of the gas first attracted to the black holes may be blown away by the energetic activity before it gets too near the black hole, but a significant fraction must eventually approach the event horizon where it is used with high efficiency to power the jets. The study also implies that matter flows towards the black holes at a steady rate for several million years.

"These black holes are very efficient, but it also takes a very long time to refuel them," said Steve Allen who receives funding from the Office of Science of the Department of Energy.

This new study shows that black holes are green in another important way. The energy transferred to the hot gas by the jets should keep hot gas from cooling, thereby preventing billions of new stars from forming. This will place limits on the growth of the largest galaxies, and prevent galactic sprawl from taking over the neighborhood.

These results will appear in an upcoming issue of the Monthly Notices of the Royal Astronomical Society. NASA's Marshall Space Flight Center, Huntsville, Ala., manages the Chandra program for the agency's Science Mission Directorate. The Smithsonian Astrophysical Observatory controls science and flight operations from the Chandra X-ray Center, Cambridge, Mass. Additional information and images can be found at:
Chandra-Press Room
Chandra-NASA
Posted by ZenSu at April 25, 2006 No comments: