The first phase – the relief phase – of Auroville's response to the devastating tsunami of 26 th December, 2004 , is now largely over. During this phase food and non-food items were distributed in 20 village communities to about 10,000 affected people. The non-food items included clothes, blankets, metal trunks and plastic buckets in addition to educational materials, like books, pens and schoolbags, for the children. The main distribution is now over, although late-arriving items are distributed as they become available. Auroville's response 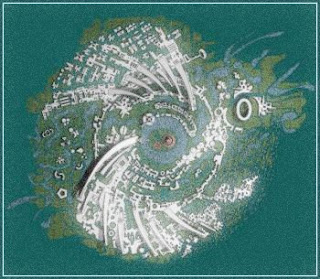 Auroville is a place in south India where, for more than 36 years, an increasing number of people from all over the world have been quietly and painstakingly working on the construction of a new township, a new way of living, a new way of being. Something is being attempted here for the benefit of all.

"Man is a transitional being, he is not final. Evolution is not finished; reason is not the last word nor the reasoning animal the supreme figure of Nature," observes Sri Aurobindo. "There is something that he is not yet which he has to be; he is reaching always towards the something yet unrealised; his whole life and nature is a preparation, an endeavour of Nature towards what is beyond him."

Auroville is to be a major vehicle of this evolutionary thrust and, eventually, a platform for transformation.

* To shape, plan and build a city for an ideal society of the future
* let the indigenous population of Auroville's bioregion co-evolve along with it
* educate our young in a way that their deeper identity is allowed to remain at the forefront
* organise a collective life without authoritarian structures
* manifest beauty in all facets of living
* consciously, wisely and justly manage the wide variety of resources available
* heal, and to evoke healing energies
* relate to the earth in a truly appropriate manner
* artistically express newly found realities within

Diplomats of 14 countries converged at Auroville near Pondicherry on Saturday to chalk out plans for association in various activities, including research undertaken by experts and their participation in the international zone of Auroville.

The diplomats representing the USA, the UK, Russia, Singapore, Japan, France, Holland, Germany, Sweden, Switzerland, Malaysia, Malawi, Mauritius, Serbia and Montenegro spent half a day visiting various places at Auroville and learning about the concept and design of the township.

They visited the Industrial zone, Auroville Centre for Scientific Research and International zone, also the Indian pavilion. They were given an idea of the basis of Auroville's visions, about how the township had been planned and all their activities in various areas.

Speaking to The Hindu, the US Consul-General, Richard D Hayes, said this was his first visit to Auroville and that he was amazed at the place and all its greenery. "The concept seems very much like many communities in the US, which has a long tradition of imaginative communities. India itself has a great tradition of supporting such communities take Tagore's (Shantiniketan) for example and fostering these kinds of experiments".

The Japanese Consul-General, Kikuchi, was impressed about the way the township had been planned "like the universe". "It is a very good idea because this area has no nationality, they are all human beings", he said. Auroville was very much known in Japan and many people wanted to come over here to live.

"Auroville being an area where everyone is free to research on anything that is useful to humanity, we would love to have some kind of cooperation with people from other countries in that area. That is why we have invited all these diplomats to visit Auroville and see for themselves the kind of work that we are doing", says Saurav of Auroville's Future.

"When The Mother inaugurated Auroville on February 28, 1968, it was envisaged as a place that belongs to nobody in particular but one that belongs to humanity as a whole. The international zone, which is meant to bring together countries of the world, has at present the cultural pavilions of India (Bharat Nivas), the Pavilion of Tibet and work has started on the American Pavilion. The Foundation stones of French, Italian, Russian and German have already been laid here and we expect more nations to follow", says Tapas Bhat, one of the first Aurovilians.

The Children's Response
"On Thursday, my class and I went to Repos Beach to help clean up the dirt left by the Tsunami wave.I wanted to help cleaning up because it is our Auroville beach.It is our beach so, if something happens, we are the ones who have to take care of it.

I wanted to help cleaning really much because I felt really sad after seeing people crying near the streets or broken houses, and hearing horrifying stories.

I felt something in my chest telling me that I had to do something to help cleaning up the Tsunami disaster.

Sometimes people think of children as people that are irresponsible or that can't do anything by themselves. Usually, I find that frustrating. So, i wanted to show that I care about what is happening and I would put some energy to help out a bit." Tsunami Children
Posted by ZenSu at February 27, 2005 No comments:

Advice From A Caterpillar 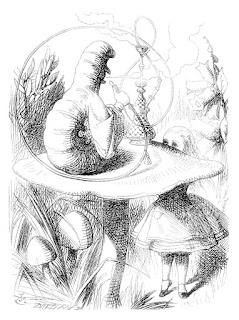 Did Alice Walk Through The Quantum Mirror?

`I'm afraid I can't put it more clearly,' Alice replied very politely, `for I can't understand it myself to begin with; and being so many different sizes in a day is very confusing.'

`It isn't,' said the Caterpillar.

`Well, perhaps you haven't found it so yet,' said Alice; `but when you have to turn into a chrysalis--you will some day, you know--and then after that into a butterfly, I should think you'll feel it a little queer, won't you?'

As a child reading: "Alice in Wonderland" and "Alice Through The Looking Glass," it all made perfect sense. The large was small, and the small was large... and falling asleep you could find yourself in another realm where time and space collided in ways that allowed extra-dimensional travel.

In this way I fell asleep to waken up and find myself on the moon. I could walk around as normal, and time travel was never a problem in my dreams. I could experience the sailing ships battling it out on the high seas, firing the canons... and waking up in time to know I was alive. I could travel to Delphi, Mars, other dimensions and experience other lives. The future and the past were my teachers.

For some strange reason human beings today seem reluctant to recall their dreams. I mean the dreams that make reality come alive. Dreams that bring us back in touch with who we really are. Dreams we can share with the animals, birds and trees in order to recall the respect and gratiude our ancestors felt for their companionship and support.
"We are nature, long have we been absent, but now we return,
We become plants, trunks, foliage, roots, bark,
We are bedded in the ground, we are rocks...
We are two resplendent suns, we it is who balance ourselves orbic and steller, we are as two comets,
We prowl fang'd and four-footed in the woods, we spring on prey,
We are clouds forenoons and afternoons driving overhead,
We are seas mingling, we are two of those cheerful waves rolling over each other and interwetting each other,
We are what the atmosphere is, transparent, receptive pervious, impervious,
We are snow, rain, cold, darkness we are each product and influence of the globe,
We have circled and circles till we have arrived home again, we too
We have voided all but freedom and all but our own joy."

We two, how long we were fooled - Walt W. Whitman
Quantum Relationships
Posted by ZenSu at February 06, 2005 No comments: