I say "earthquakes"; but I suspect changes in underground water play a part... 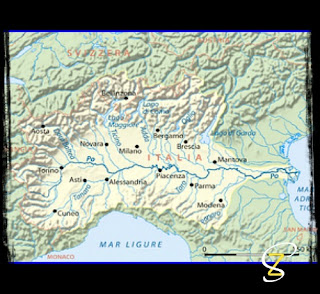 Earthquake lights were seen above the city on November 15, 1570, the night before the first quake. After the initial shocks, an earthquake swarm shook the area with over two thousand aftershocks between November, 1570 until February, 1571. The release of methane, before the stress of the quakes.

I don't think that when observing the extreme pattern of May, 2012 aftershocks, that one can simply point to one issue and blame that one issue for what is happening in Northern Italy.

Understanding The Po Valley
Northern Italy's Po Valley aquifer is located in thick clay sands, with mud volcanoes, where there are various depths of groundwater, from shallow to extremely deep, across the whole valley basin - leading down to the Adriatic Sea.

The natural forces that make the Po Valley so rich and productive for humans, are the forces that make it so dangerous. It is not enough to speculate what can cause the series of earthquakes shaking this region in 2012. You have to take time, do serious research and find out .. and begin to understand the Planet you live on.

The complex liquids and gasses lubricating the major fractures crossing this area of Northern Italy are under pressure from many sources. There are the gravitational forces, strongly affected by water and the movement of underground water - the Sun and the Moon.

The rapid extraction of shallow and deep groundwater (pumping it out for industrial, agricultural and human needs) is playing a part in the increasing subsidence rate of the basin. Add to that the deep oil fields and the gas bearing fields.

Over hundreds of years, until this current time (where we now extract more resources faster), human activity has removed underground water at ever increasing rates. The Earth is going to correct that in order to maintain balance and equilibrium.

In my imagination, the necessary underground liquid/fluid resources are not as effective at cushioning and lubricating the tectonic fractures during times of gravitational stress collisions. People don't understand that the Planet / the landmass floats on a series of layers including water, oil and gas.

I guess when people observe earthquake lights in the skies, before a major quake, this is the prior release of deep underground methane .. one of the forces that also lubricates the strata of underground fractures. I don't know, that is just my imagination. That the land is a cushioned multi-layer strata of many elements that together create and sustain life on Earth.

Email ThisBlogThis!Share to TwitterShare to FacebookShare to Pinterest
Labels: Earthquakes

Culture - The Ancestor's Tree of Life

The Ancestors gave life form out of formless chaos.

From the pre-Celtic Ancestors the "Tree of Life" took form on the Earth .. germinating and growing roots onto the surface of the Earth from the universal creation out of which the Galaxies first expressed energetic and then physical geometrical form(s).

The Ancestors gave birth to Sacred Geometry, out of which the Alchemy of Culture arose. Original Culture is the child of Alchemy, which itself grew from the seed of Sacred Geometry.

Original Cultures give form to the nameless chaos [humans call Creation]. However, Original Culture is not a static thing .. no more than the branches of trees are static and fixed. Only when a tree dies does its enigmatic form appear fixed and static.

Yet, even in death the branches of a tree take on an animated form in terms of fungi, lichen and wood burrowing insects. Nothing is fixed in space and time. Physical form returns to its formless state without effort or resistance.

It is the same with Original Culture...

Ancient expressions of art [from the Tolteks to Egypt and the Maya] are creational forms of this dynamic expression, where fractal geometric form naturally arises from the formless.

The Original Ancestors tree-of-life runs like a golden-thread through all the ages of humanity, whether we are aware of it or not. The key is to be aware of it and not try to twist the threads, alter or distort them. One only has to follow them, to find the right path.

Nature Is Our Guide
Respect and love nature... I once met a little tiny mouse running in front of me on the path .. and due to my Celtic Ancestral awareness I knew to stop in my tracks and observe!

I stood very still and the tiny mouse walked in circles around my feet (my shoes), then climbed onto one shoe (its platform) and the tiny mouse climbed up and touched the leg of my jeans in the same way I would touch a sacred standing stone anywhere in the world.

I could see the sharp dark bright eyes of this mouse looking straight at me... These animals are not stupid. All the animals, fish, birds, plants and trees know exactly that we humans are asleep.

This tiny little mouse communicated to me (beyond words) the entire current (warped) history of mankind.

Even better than that .. was the compassion.

There was a time on Earth when humans were awake and where humans felt compassion, respect and appreciation for nature .. for the animals, insects, plants, fish and birds. These living intelligent beings were our brothers and sisters.

The creatures of the Earth still know who we are .. they are not asleep. Because humans are asleep, they do not see that the animals and plants are awake. Culture of the Ancestors is everywhere around us, in every leaf, fruit and tree...

The tree-of-life is within us in the form of spirit DNA of the Ancestors.

Email ThisBlogThis!Share to TwitterShare to FacebookShare to Pinterest
Labels: 3114 BC

The most dramatic of all are the white Acacia storms in May. The white blossoms are brightest of all against the dark grey storm clouds, that drift along between heavy rain showers, blue sky and bright sunlight. Later in the day, when the sun descends on the Western horizon, dramatic rainbows are cast onto the dark grey clouds in the East.

The brightest and most colourful rainbows shine magnificently, magnified in depth against the darkest storm clouds.

It is the same for humans and for the collective human society. Inside us exists everything we see and feel in nature. The only difference is, nature is not afraid of itself ... nature is! However, humans are afraid of this natural transformative power within the body, within the spirit, within the mind.

In general, humans are afraid of those dark psychic storms of the soul.

You know! Those massive storms that appear brooding and dark around the tallest mountains. Where the dark and brooding storm clouds embrace the topmost peaks of those mountains. Yet, in the midst of those dark storms one can experience the brightest and most powerful rainbows.

If people and planners were foolish or careless [or got too greedy], all their buildings can be washed away by the downpour of water and natural landslides that occur on vulnerable parts of the mountain slopes. It is the same in society. When people or organisations get too greedy, they attract what could be called "correctional storms".

The more greed people build, the deeper and darker the storms get. Because, we are a part of nature and the same processes of nature are taking place inside us and within our interrelationships with each other and with the Planet we live on.

It is totally natural that the Planet cleans itself every now and then. From hundreds of years to thousand of years cycles, the depth and power of the Earth's self-cleaning varies. Our ancestors used to know and understand this principle.

Native Americans warned: Forget the principles of balance and you get hit with the consequences.

It's not change that we need .. we need balance.

When humans live in balance change is natural. When humans find balance the vehicle of planetary travel is living-in-balance where the fuel powering the journey is change.

Change is a natural outcome of balance / harmony.

Go back to the landscapes of nature, where life forces of Earth create balance - out of which weather patterns form. Humidity and precipitation change, temperatures change, one day there are clouds and the next day blue skies. Even desert temperatures and weather conditions change dramatically as day turns to night and as night turns to day.

In reality, humans do not want change (which means they have to adapt); but humans try to create static environments in which they live elaborate, self-indulgent and unnatural lives. The world systems are terrified of change, and in that respect invite conflict, division, fear and violence.

Human societies around the Planet are a mess because humans are not living in balance. They don't even seek balance. It is not something anyone cares too much about. The solution that will resolve much of the world's problems is not even on the psychic radar.

In Ancient Egypt - Early Dynasties - the body was the Temple .. a representation of divine order. The body was the measure of symmetry and balance. How many of us truly love our bodies? The same way one would love a dog or a cat or a beautiful garden? How many of us appreciate our own inner temple of balance?

Even physical death is a representation of balance. The same harmonics apply to death as apply to life.

You don't have to destroy society to change it...

All you need is to look for, find and understand balance .. and this is why a large number of people in Europe (for example) will return to the land in the next fifty to a hundred years. You want growth? Grow food, grow trees, grow forests, grow Hemp ... from Hemp you can eat the seeds and build houses .. and the Hemp plant also survives drought.

When we seek balance, change comes about naturally on its own. No one has to want change .. it will simply form as a natural part of the human landscape. This is not a question of political, social or religious ideology .. it is a question of relationship with oneself.

Let's just take one aspect as an example: We live our entire lives inside a human body and how many of us learn from the body or even listen to it? How many of us consider the body as a wise teacher? How many of us would dare to turn around for a second and notice that the body-mirror to the Self is there? The inner mirror of change...

That is where you will find, on that dark obsidian polished surface, your brightest rainbow.