The Path .. passing through the root of fear. 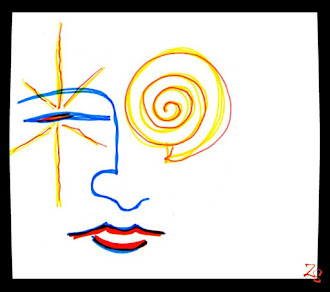 The Internal Path
Have I used this drawing before? I hope not! I have so many drawings...

In some way this drawing is closer to my spirit and many key incarnation experiences.

In general I do not like the outer public field where society says: The codes are available to EVERYONE.

Not in my experience +_#

I am not talking about 'Secret Societies' .. because I see them also inhabiting the public sphere. They do not know any more than the general population. One example of this is: If you have to exert influence to make the general public 'stupid' then you are stupid! Only a lower density awareness would desire to make the surrounding environment STUPID and DENSE.

It's not rocket science!

All I can say is: Stupid is as stupid does.

To reach out and influence the outer sphere there has to be a CONNECTION .. like yin yang .. so the influencer is influenced by the same level energy [intent] they send out to others. They are simply sending out frequency signals equal to their own internal state. If you see ants on the circular rim of a glass .. the lead ant leaves a trail [influence] and all the others follow. It is the same thing.

The desire to influence is based on fear.

I am not sure that a Central Paradigm Model is based on fear .. because I think that intelligence can function within that paradigm and move beyond fear. The central control paradigm can be a framework for fear based societies. How the humans organize themselves within each paradigm is an indication of their collective spiritual progress or fear based regression.

No one is king forever! When the paradigm field shifts to a new model .. fear based insecure incarnations do not do so well. When the whole cycle advances .. humans will never return to a fear based model. The paradigm shifts are simply open interactive [containment ] fields that allow incarnate spirits to develop or fall behind.

The Root of Fear
We have all the emotions coming out of one central root inside the human being. We normally live within a carousel of emotions from the moment we are born to the end of our lives. Just think about this for a moment! What does a carousel revolve around? ONE CENTRAL POINT.

Let us imagine you see and experience many colored flashing lights like so many emotions. All those different colored lights are powered by one unseen source: electricity. The root of all the colored lights is electrical power.

It is the same for the emotions.

What kind of super advanced UFO can travel to the root of emotions? AWARENESS.

Let me show it to you. This is not as simple as it may sound. You become aware of an emotion that appears to overwhelm you. You step back and become aware of it. Rather than run away from the feeling you go right to its center. You observe. The emotion runs away and hides .. you lose sight of it.

You already challenged the source of these emotions and so it is going to throw up more. I may say more about this? All I can say for now is that thought [entity] hides and adjusts as it was designed to do. When you alter the inner mind energy frequency it cannot function in that field.

You decide not to give up and you begin [awareness begins] to question the source of these emotions that you have experienced your entire life. You go look for the source. Then the source starts throwing distractions into your mind in many forms. It can be old experiences .. memories .. fears .. traumas .. desires .. pleasures .. sorrows .. regrets!

You remain calm and silently observe the root source no matter what distractions are throw into your mind. In fact .. the activity is a signal [activity] that leads down a path to the source of these emotions. Again the emotions disappear .. seem to run away and hide.

You keep going .. using the energy of inner awareness to go straight to the root of all emotions .. and they keep running away and hiding from you. That means thought is weaker than awareness!

You allow for no distractions = you do not identify with the mix of emotions being thrown into your mind as you follow the path to the root of all emotions .. the root of the carousel. It has a center. You suddenly realize: This is not ME .. this is a distraction. Before this journey you always assumed the emotions were YOU.

Perhaps you come to the root and everything is SILENT [for now].

You may feel a sense of peace .. at last there is silence...

Do not stop there. If you stop the whole process simply redesigns itself in relation to your new realisations. You do not stop .. you keep going. From that point you conserve your life energy by maintaining a deep repository of awareness to discover and go beyond the root of thought .. the root of fear.