iShould not be here .. or maybe iShould be here?
Maybe iLet you decide what is true ...

This is a funny story .. well .. iThink it is a funny story. It depends on your perspective and on how you look at life from where you stand now. We take life for granted [at least most of the time]. There are people here on Earth who are not supposed to be here .. and you understand the true nature of reality when you understand why we are here in the first place = iN-first-place / first place !!

iAries = iShould Have Been Taurus #_#
I was born four weeks early .. my birth was scheduled to be end of April and I unexpectedly kicked myself out end of March. That was how it was explained to me later as to how I was born: I kicked myself out-of-the-blue with no warning and in a very quick birth I was born .. or landed on Earth.

Birth is on "autopilot" mode and is not a singular act of iRespond = responsibility.

But .. what if birth is iNavigate where you are the pilot undertaking a spiritual journey?
That puts a whole new light on your birth !! Don't you think ??

Wow! Just think that you actually know what you are doing #_# 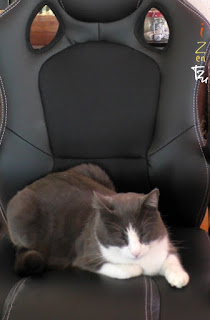 Aladdin Cat Should Not Be Here!
Aladdin bad cat faced some issues after the kittens were born on a farm .. semi wild but bred by the farmer because the cats catch a lot of mice. For his own reasons the farmer drowned the litter of kittens pretty much as soon as they were born.

Aladdin lost all his brothers and sisters .. but for some reason the mother cat was able to save this one little kitten who later became a family house cat .. with friends who found out what had taken place and they adopted him once he was old enough to leave the mother cat.

The mother cat took Aladdin and hid him in some grass in a field where the farmer later realized the cat's unusual behavior and brought them back to the farm. If all these strange events had not happened we would not have Aladdin bossing everyone around .. Biting The Cameras !!

I am trying to show that what SHOULD BE is an illusion and there only exists: WHAT IS.

To be honest I just laugh at stuff when I hear it .. because I was born aware of many lives. I was aware I have been on Planets before [many times] and I was aware that my home is not here [on Earth]. So .. when I was told the strange story of my birth? Well .. my reactions was:
So what ?? Is That So!

I know who I am .. and I was born knowing who I am .. so I do not rely on outside sources for validation. I simply am who I am [at any given moment in space time]. So .. the funny story is sort of similar to Aladdin cat in that during early pregnancy my mother got under-the-counter "mixture" that causes a fetus to be aborted. This was at a time when this activity was illegal .. and that fetus was me *_*

The really funny part is that as a result my mother almost died ...

I was okay because something very powerful protected me .. but after taking the herbs my mother got very very sick and drinking the -mixture- had a very bad effect on her .. so bad she wished she had never taken this action. That is a strange kind of instant Karma where you do something stupid and it backfires and you abort yourself.

It was like .. either I am born or both of us would die in that moment.

The reason I say this is because there are special people on Earth who technically [for various reasons] should not be here .. but they are here = doing the work. These people apply extra effort to make up for all the people on Earth who do not do the inner work and who take life for granted.

Because .. life is very special = it will not always be so easy to be born as it is now.

I used my Shaolin past lives skills to kick myself out and land on Planet Earth as an Aries at the time I knew I had to be born. The fact that we are born is WHAT IS = REALITY. Everything else is an illusion .. shadows cast upon the mind. What SHOULD BE is an illusion [what iShould be].

When I was told all this stuff as a kid .. I was very calm .. and I thought [I did not say] .. that this was a really stupid thing to do = you could have died. Why did I not obsess over my own life and form a complicated trauma to add to all the other traumas people create in their indulgent minds? You have to have a sense of humor +_+

YOUR mind is the most important factor in all life experience !!

It is very simple to do = DO NOT INDULGE IN TRAUMA ...

It takes inner DISCIPLINE .. and you do have to step up and take control of the Inner Mind Navigation System your spirit is born into. And .. I will try to go into this in more detail .. but really this is a self-discipline = iTeachMyself JOURNEY between you and the Invisible Masters.